From the artist to the anthropologist

José de Guimarães (born in 1939) is a singular and unique figure in contemporary art. His training as an engineer, the approach he adopts of an anthropologist, his passion as a collector, and the eye of the artist, have merged and intertwined, over a span of sixty years, to create a language both graphic and richly coloured. 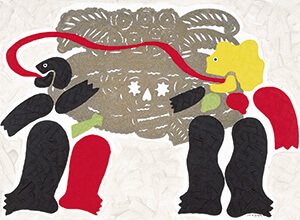 “Art is the reality of the dream.”

The discovery of Angola, then of Mexico, and of Japan, were the particular inspiration, after the first works of pop art, for a quest for a form of “art brut”, powerfully expressive raw art, an art creating a dialogue between ancient cultures and modernity. It creates its own vocabulary, based on the dissection, fragmentation, and dislocation of signs and symbols, the combinations of which, from his Alphabet of symbols to the monumental works integrated and inspired in urban art, are then manifested in all sorts and types of materials. In the course of different cycles, a confrontation arises between the themes of life and death, rendering, in a chromatic and variegated creative range, a sense of energy both vital and unflinching, an utterly entrancing incandescence.

Established in the decade from 1980-1990 by international recognition, the work of José de Guimarães bears witness to a vision of the world in perpetual renewal, the vision of one who is on a profoundly anti-conformist quest, traversing the world in search of its many and varied roots. The Musée Würth retraces here the creative path of this transcultural nomad, bringing into focus a part of the artist’s collection of African works and his own creations, drawn from Würth collection or loaned by the artist himself.